Upon completion of the A-Style Mandolin kit I embarked on a scratch build of my own making, or unmaking. Using some Walnut on hand, I planed and sawed until I had two backplates and two sets of sides. I had an F- style mold but didn’t want to use it specifically, so I traced it and made changes as I wished. Next I cut my block set which became design as you go. Once in the ball park it was time to start bending my side pieces and that’s where the story gets ugly.

I made the main bout piece first, the large curve easy of course, however the curl into the upper point I created raised more than a few bad words and growls. After about 8 hours of swearing and breaking wood, breaking wood and swearing, I finally have something to manage but, “it ain’t pretty” .

During the bending process I was fitting the sides to my mold and blocks, during the next two hours I managed to get all blocks and rim parts glued into the mold.  In light of the horrendous bending and difficult time I had with the Walnut, I have decided to just make one unit at this point.

After finally getting a rim together, it’s time for the kerfed lining. I make my own most of the time and had some blanks for small instruments. Using my home-made kerfing jig I have two 36” pieces. At the end of the day, I have the rim finished except for more sanding. At this point I’m a little stumped as to what’s next so I’m gonna build the neck which I need prior to finishing the top or back. There are also plenty of other things to do before the top and back, so I need to be sure not to get my ass out front.

Since this is a first for me and something of an experiment, I decided to use the Walnut,(same board), for the neck. I know grain orientation for guitar necks but decided to read up on some Mandolin information. I was surprised at two things, some prefer the grain run parallel and some just don’t care. Also, some agree on grain perpendicular to fingerboard plane, which always been my preference. I also build stacked heels for my guitars. With all this in mind I glued two 2×2 pieces with the grain vertical and opposing. I now have a 2×4 to make my neck with the grain perpendicular to the fingerboard plane, keeping aware of my glue joint during layout. If I decide to try more mandos, I would not use a glued piece.

I spent about 24 hours on the carving the top, then another two hours cutting apertures and re-carving the top scroll. I knew my scroll design was gonna be in the way but having never carved a scroll, I had to start somewhere.  Plus the benefit of practice carving. Finally I had the two plates where I wanted them for assembly.

I decided to cut the neck pocket in the heel block first, then gluing the top on and finishing out the cut. I made the cuts for the neck and pocket on the ol’ tilt-a-table band saw jig as seen on you tube. Once the neck is fitted in I began to layout and re-carve the scroll. It turned out fine. My apertures are graduating arcs with a moon and star respectively on base and treble sides.

Next,I work on the neck and fingerboard. This took a while as I had some issues with fretwire, which caused me to pull all the frets and re-fret with different wire.  While waiting on replacement wire I finished up the neck and installed binding on the top.

Another item I was totally unsure about was the corner protectors. A small bone insert at the tip of the peaks. I used some thick saddle blanks, rough shaped them, glued them in place and finished the contours during final assembly and sanding. I believe they worked.

I’m currently waiting on lacquer to cure so I can finish up and hear how this one sounds.

Well, my little Mandolin project is buffed, and strung. I made a pretty major miscalculation on my headplate and machine placement. It works okay, but the outward ends of the tuner plates are tipped away from center causing the D (mostly), and A sets to rest against the other strings. With everything set-up to spec it sounds and plays really good for freshly built.

In summary, I learned a great deal more about Mandolins. I also learned a few new tricks and certainly some things I would do different next time. Mmm? Next? 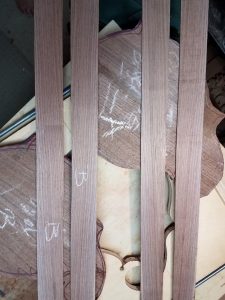 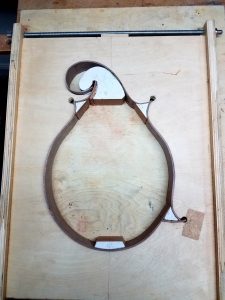 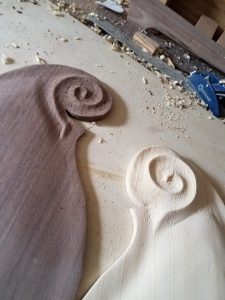 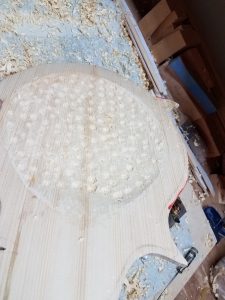 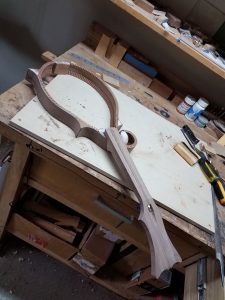 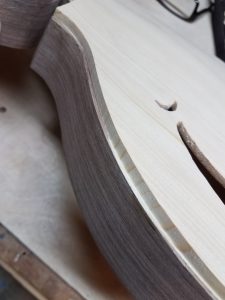 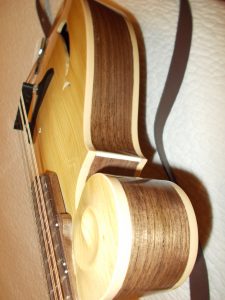 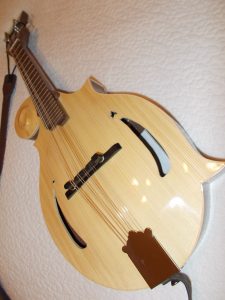 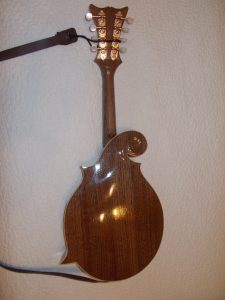 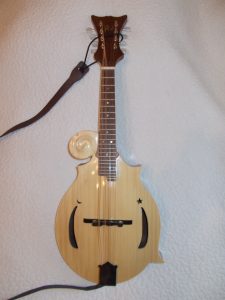